The UK’s 10 hottest years in records stretching back to the 19th century have all occurred since 2002, the Met Office has said.

Analysis of temperature records which have been extended back to 1884 also reveals that none of the 10 coldest years have occurred since 1963, showing how the climate is warming.

In the Met Office’s latest annual state of the climate report, the temperature series for the UK has been extended back by 26 years from 1910, as the data was added as part of ongoing work to digitise historic weather records.

Dr Mark McCarthy, head of the Met Office’s national climate information centre, said: “Looking back further into the UK’s weather reveals a very interesting timeline, with the top ten warmest years at the most recent end, since 2002.

“Extending the record back by 26 years from 1910 to 1884 didn’t bring in any new warm years, but it did bring in a number of new cold years, including several that are now within the top ten coldest years.”

The annual report shows that 2018 joined the top 10 warmest years at number seven, despite the severe “beast from the East” cold snap early in the year.

The cold weather saw the UK having the most significant snowfall since 2010 last year, though generally snow events have declined since the 1960s, the Met Office said.

In a year of extremes, the UK also saw a heatwave last summer, which the experts said was made 30 times more likely by climate change, and the season was the equal-hottest summer on record along with 2006.

Commenting on the report, which is published in the International Journal of Climatology, Dr Michael Byrne from the University of St Andrews, said it was “hugely significant, though not surprising” the UK’s top 10 warmest years had occurred since 2002 and summer 2018 was the joint-hottest ever.

He said: “The world has warmed 1C since pre-industrial times, meaning that hot years are the new normal.

“Not only is the UK getting warmer but also wetter, with 13% more summer rain compared to last century.

“With global emissions of greenhouse gases on the rise, the UK will continue to get warmer and wetter as global warming accelerates.

“The science of climate change is now clear. The UK Government must ramp up preparations and ensure that our infrastructure and citizens are prepared for what is to come.” 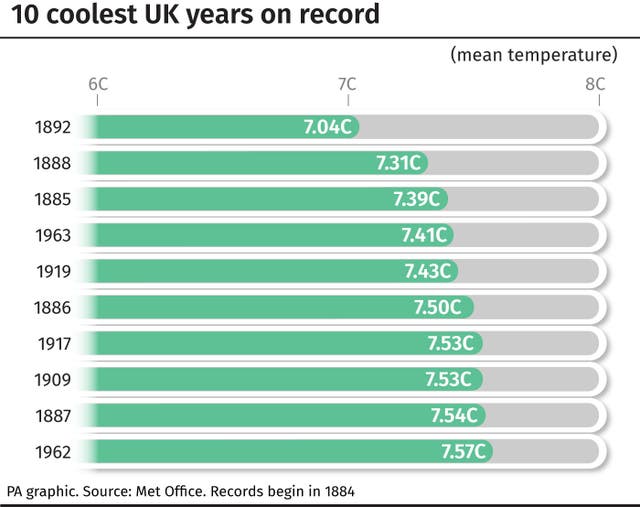 A Government spokeswoman: “The impact of climate change is clear and demands urgent action, which is why we are the first major economy to legislate for net zero emissions and eliminate our contribution to global warming by 2050.

“We’ve seen first-hand the effect climate change is having on our environment, and we share people’s passion to tackle this issue and protect our planet for future generations.”

Dr Katherine Kramer, global climate lead at Christian Aid, said the findings were just the “latest alarm bell to go off as we fail to grapple with this growing climate emergency”.

“While these hottest years have made life uncomfortable in parts of the UK, just imagine what it’s like for people in even hotter places in the global south, often forced to work outside without access to air conditioning or even shelter.

“With climate change, the only way we can avoid this becoming the new normal is if we take action and reduce our emissions radically and rapidly,” she said.

Want to join the discussion?
Feel free to contribute!

How energy efficient is your local supermarket?

This site uses cookies. By continuing to browse the site, you are agreeing to our use of cookies.

We may request cookies to be set on your device. We use cookies to let us know when you visit our websites, how you interact with us, to enrich your user experience, and to customize your relationship with our website.

Click on the different category headings to find out more. You can also change some of your preferences. Note that blocking some types of cookies may impact your experience on our websites and the services we are able to offer.

These cookies are strictly necessary to provide you with services available through our website and to use some of its features.

Because these cookies are strictly necessary to deliver the website, refuseing them will have impact how our site functions. You always can block or delete cookies by changing your browser settings and force blocking all cookies on this website. But this will always prompt you to accept/refuse cookies when revisiting our site.

We fully respect if you want to refuse cookies but to avoid asking you again and again kindly allow us to store a cookie for that. You are free to opt out any time or opt in for other cookies to get a better experience. If you refuse cookies we will remove all set cookies in our domain.

We provide you with a list of stored cookies on your computer in our domain so you can check what we stored. Due to security reasons we are not able to show or modify cookies from other domains. You can check these in your browser security settings.

These cookies collect information that is used either in aggregate form to help us understand how our website is being used or how effective our marketing campaigns are, or to help us customize our website and application for you in order to enhance your experience.

If you do not want that we track your visist to our site you can disable tracking in your browser here:

We also use different external services like Google Webfonts, Google Maps, and external Video providers. Since these providers may collect personal data like your IP address we allow you to block them here. Please be aware that this might heavily reduce the functionality and appearance of our site. Changes will take effect once you reload the page.